UnderscoreJs is a JavaScript Libraries which have several functions which extend functionality without extending any built-in objects.  It is comparable to features provided by Prototype.js and the Ruby language but opts for a functional programming design instead of extending object prototypes. For example, Underscore.js each function delegates to the host environment’s native for each implementation when present or a compatible version when absent. The documentation refers to Underscore.js as “the tie to go along with jQuery’s tux, and Backbone.js’s suspenders.” Underscore.js was created by Jeremy Ashkenas, who is also known for Backbone.js and Coffee Script.

UnderscoreJS have several categories for functions that is-

These functions can be directly used on Java Script variables, and provide desired results.

Now here is a question: “Why we use UnderscoreJs in our app?”

“Simple answer is that by using this we can speed up our coding by avoiding lots of loops and checks.”

Lets have a look on AngularJS-

AngularJS (commonly referred to as “Angular” or “Angular.js“) is a complete JavaScript-based open-source front-end web application framework mainly maintained by Google and by a community of individuals and corporations to address many of the challenges encountered in developing Single Page Application. The framework used for developing cross-platform mobile apps. It aims to simplify both the development and the testing of such applications by providing a framework for client-side model-view-controller (MVC) and model-view-view model (MVVM) architectures, along with components commonly used in a rich internet application.

The AngularJS framework works by first reading the HTML page, which has embedded into it additional custom tag attributes. Angular interprets those attributes as directives to bind input or output parts of the page to a model that is represented by standard JavaScript variables. The values of those JavaScript variables can be manually set within the code, or retrieved from static or dynamic JSON resources.

Steps For WebApp with AngularJs and UnderscoreJS… 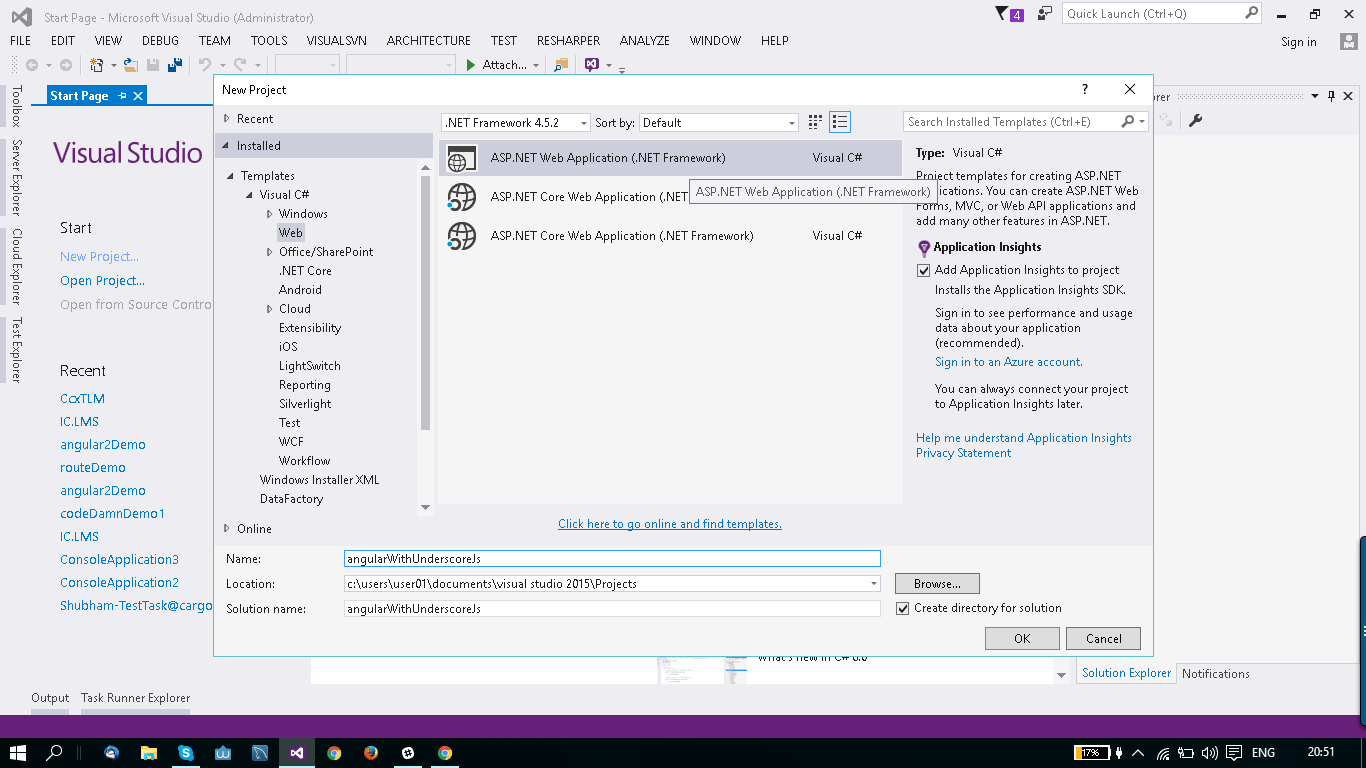 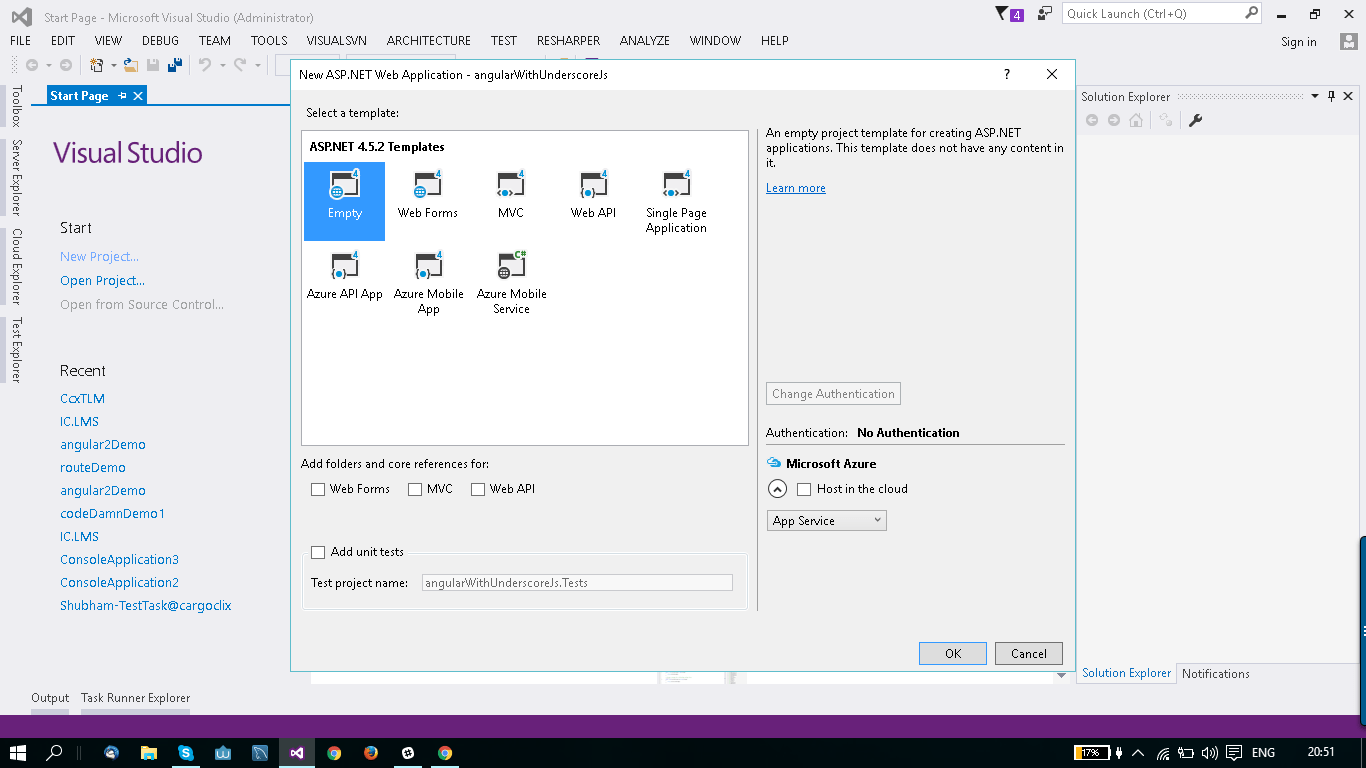 Step 2- Including Libraries- Now we include a library, which we needed in the project.

How we can insert the library in our project?

After initializing project we have to insert library, there are several ways, some are following-

In this app, I am using the fourth method after downloading the .js file put it in script tag in index.html file.

Include all libraries in index file.

Create app.js and include it into index.js file script tag.

*remember do not forgot to include ‘jsonFormatter’ dependency in to angular app. Because it is third party tool which is in our app. 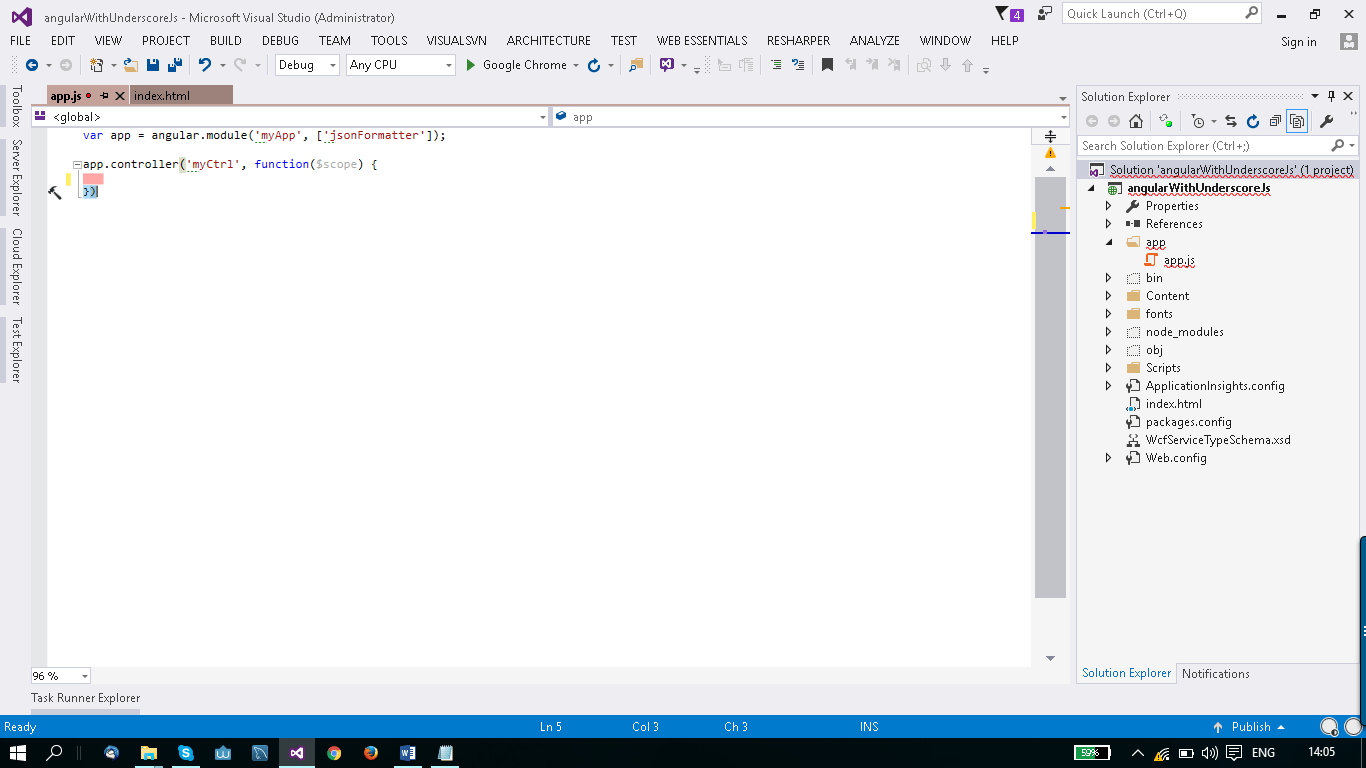 I have created three sections for Underscore.js demo-

A convenient version of what is perhaps the most common use-case for map: extracting a list of property values.

If we want to extract all values for one property then we use this function.

Looks through each value in the list, returning an array of all the values that pass a truth test (predicate).

Example: In this example if we have taken a function which return even number , we can put any function.

Returns the first element of an array. Passing n will return the first n elements of the array.

Example: in this example underscorejs function will return first element of this array

Flattens a nested array (the nesting can be to any depth). If you pass shallow, the array will only be flattened a single level.

Example:  in this example three level array Array is taken after using flatten function of UnderscoreJS we will find single level array.

Retrieve all the names of the object’s own enumerable properties.

Example: this function will return the property name associated with in object.

Returns a copy of the object where the keys have become the values and the values the keys. For this to work, all of your object’s values should be unique and string serializable. 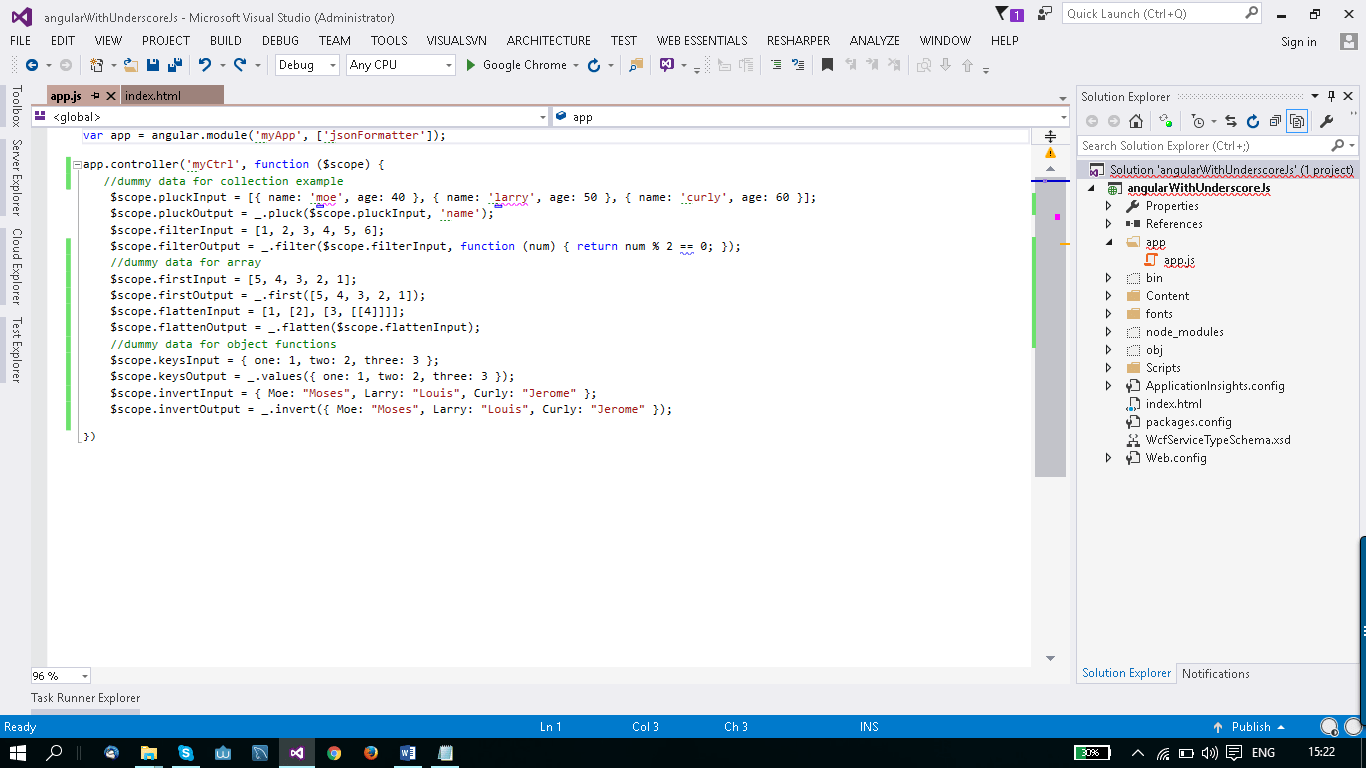 In index.html put this code- 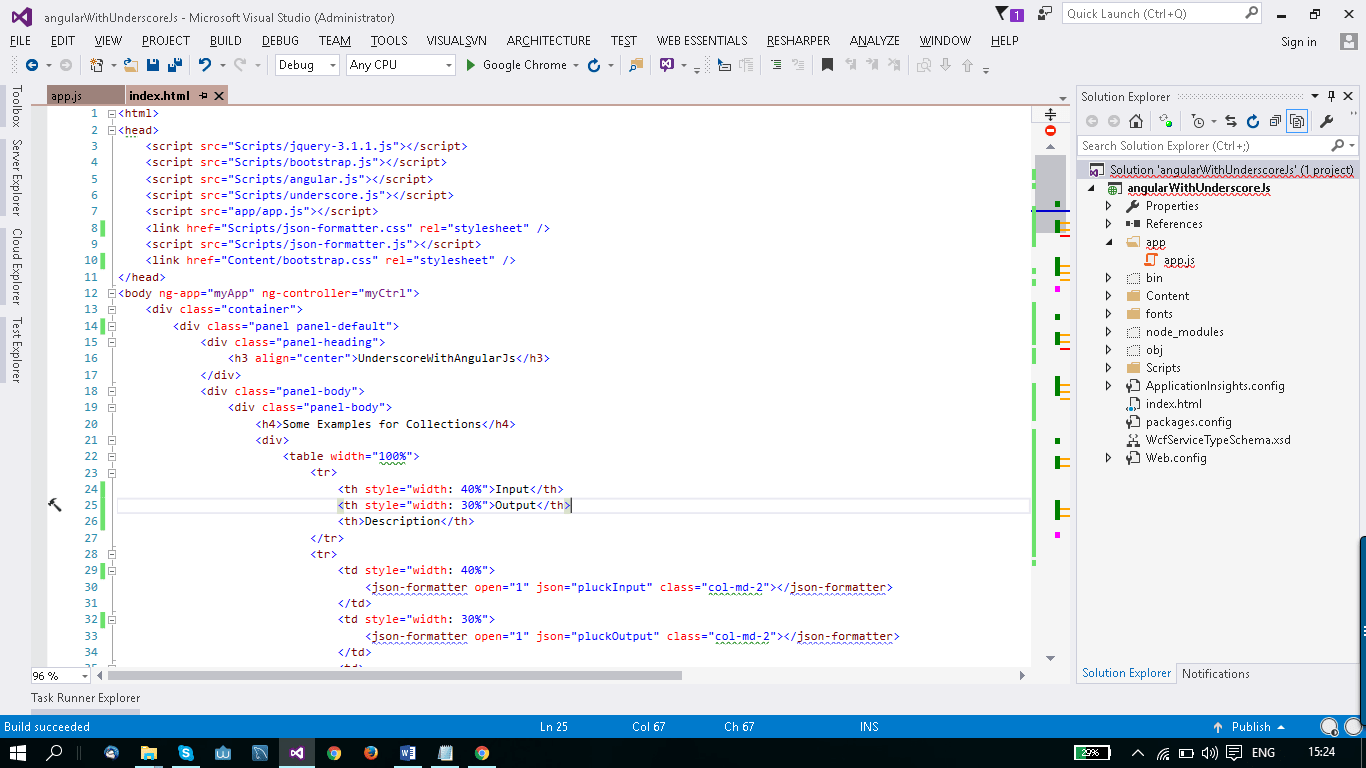 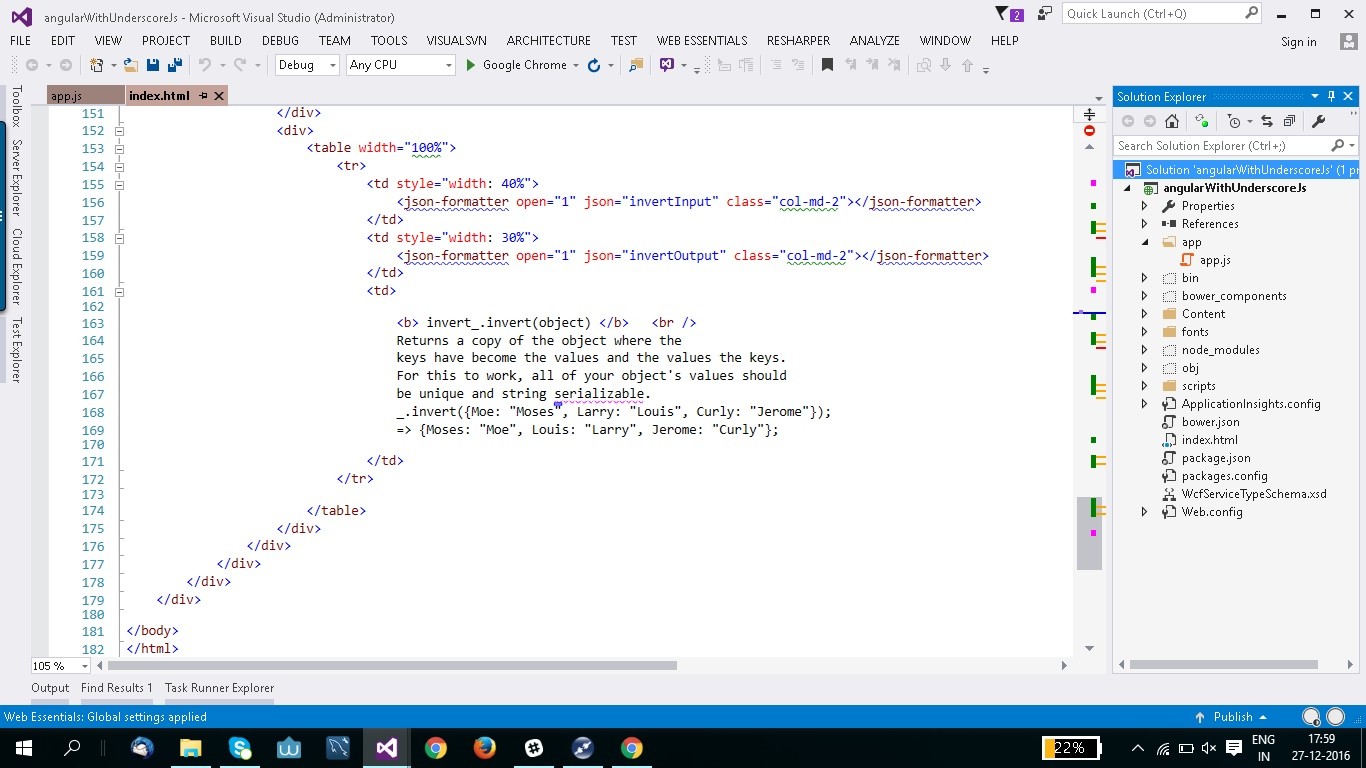 After completing this press ctrl+f5. Our app will look like this. 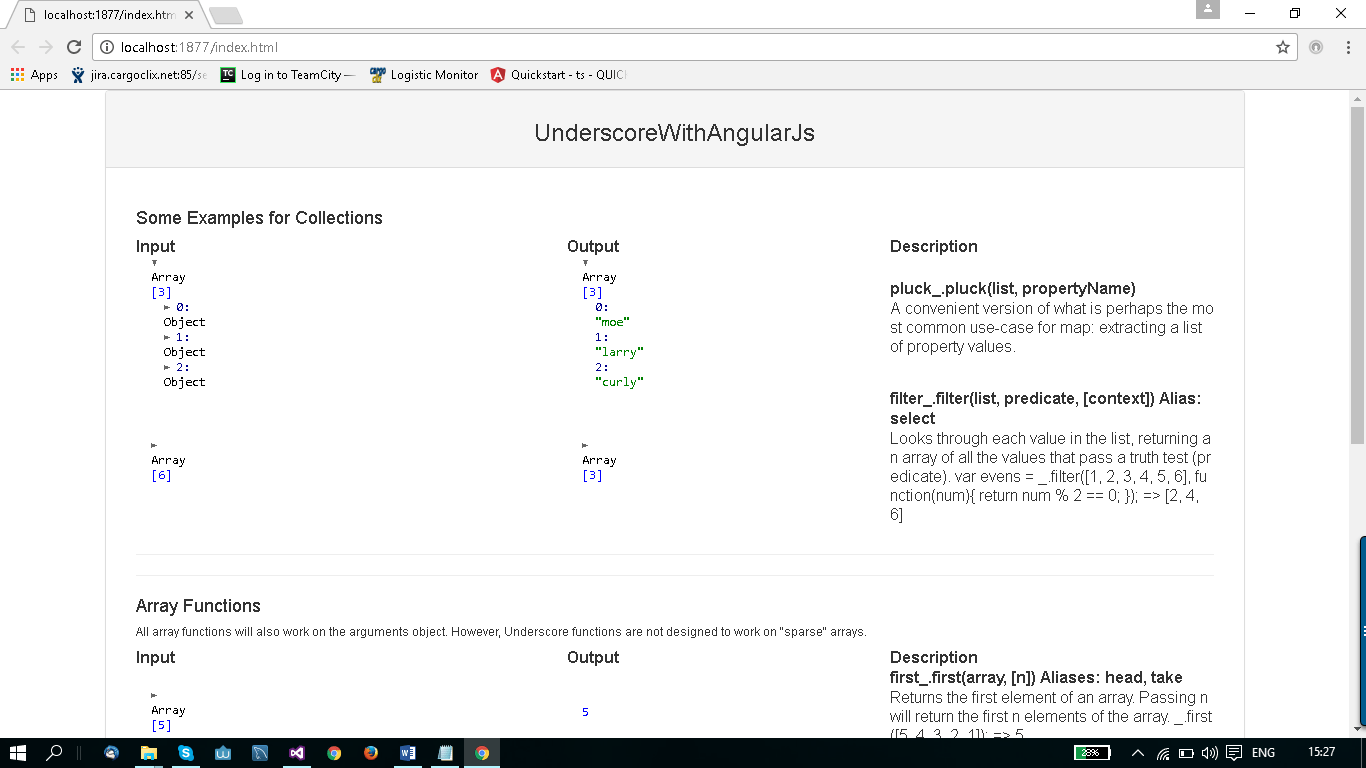 This is how we can use UnderscoreJs inside the AngularJS App.