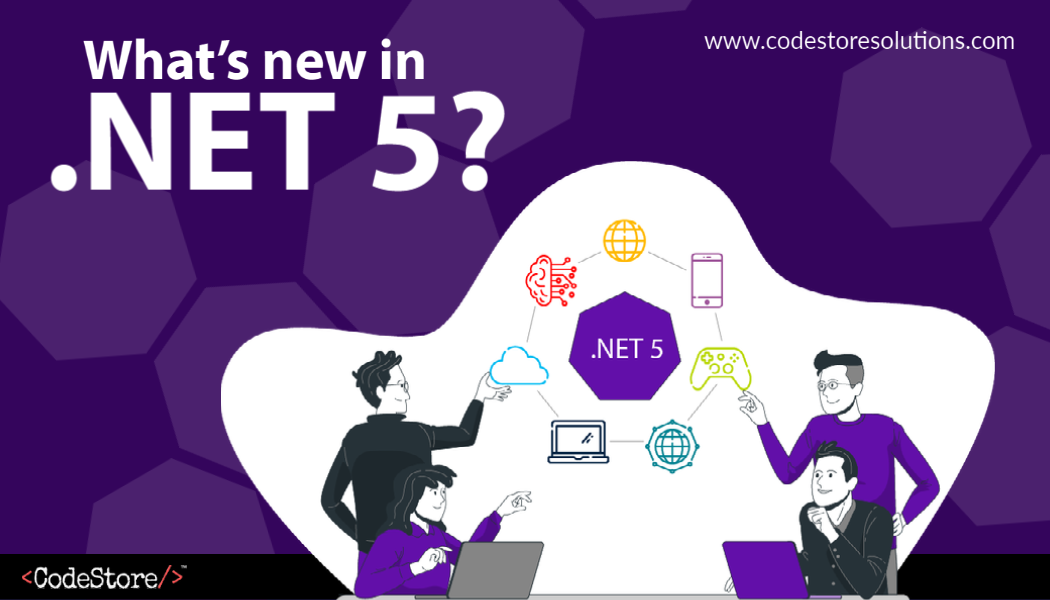 Do you remember Microsoft Build 2019, where they announced that .net 5 is on its way and would be arriving by 2020?. They were right, Microsoft has released the dot net 5 and is available for the developers. Meanwhile they have also included that this version will be changing the way of development.

Before knowing more about this latest framework firstly we will have a brief idea about Microsoft .net.

Further, Microsoft developed .Net Core which turned out to be a great product, and then started attracting Linux and Mac users. Alongside these two versions of .Net – .Net framework and .Net core, Microsoft released .Net 5 – the future of .Net. This also added that the .Net 5 will be both open source and cross-platform. It means this will replace .Net Framework, Xamarin, and .Net Core with a single unified platform.

With the announcement of .Net 5, we noticed that Microsoft is skipping .Net 4 to avoid the mix-ups. Microsoft did this to maintain the balance between the upcoming versions.

Microsoft has confirmed that .Net 5 will be fully powered with the best features of the frameworks, Core, Mono, and Xamarin. Dot Net 5  will also be providing a number of APIs, Libraries, and run-time to create the most efficient apps for Web, Mobile, and Windows.

The main objective of .Net 5 is to empower unified .Net client application projects to improve the rate of delivery on various operating systems like Windows, Linux, UNIX, Macintosh, and others.

How .Net 5 will be making feel proud to the Microsoft community?

It is believed that .Net 5 will offer everything which .Net core provides. This makes .Net 5 more suitable and reliable for developing applications for mobile and IoT platforms. With all these new updates and features, .Net 5 is trying to end the confusion from developer’s mind. Before .Net 5 developers were bit confused in choosing between .Net core, .Net framework, and Mono, based on which they were developing the applications.

.Net 5 has started moving ahead of .Net core by incorporating the best features of it. Let’s see what all updates have .Net 5 incorporated into it. 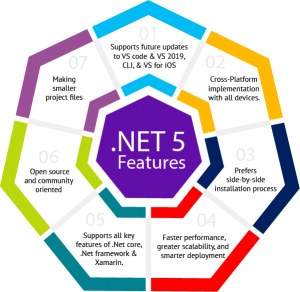 Some Incredible Features of .Net 5:-

Microsoft is trying to fix the bugs which were present in the previous versions. The team has confirmed that the latest version will be bug free and as a result of this it will be easy to use. Let’s see some of the features of .Net 5.

With the help of dot net 5, the mobile app development process becomes easier.  However dot net 5 is both open source and cross-platform. With the help of Xamarin, dot net 5 will continue to develop the most efficient Android, iOS, tvOS, macOS, and other applications.

With the release of dot net 5, developers will continue to develop the most efficient applications on Azure. Azure app development is one of the important feature in .Net 5.

This is one of the best features in dot net 5. Most importantly with the help of visual studio .Net 5 will be supporting unity, as a result of this we will be able to see some of the most flexible game apps in future, built on .Net.

Dot Net 5 has come up with certain performance improvements in different areas and the Microsoft community is trying its best to make it more user-friendly.

According to Microsoft the .Net 5 is completely ready to boom the market and has deployed into production. This is very exciting as .Net 5 is the evolution of both .Net Core and Mono. Moreover it helps in bringing these two runtime into a single parity and allowing .NET frameworks code to move forward into the future of dot NET.

Microsoft is expecting a lot from dot net 5 and is focusing on the additional assurance of the quality. There are two ways of using .Net 5. First way is, one can simply download the same from official .Net website, and the other way is use it with visual studio 2019 and visual studio for mac. If you have any project on dot net and that doesn’t use the latest version then upgrade it to .Net 5. Moreover you take the advantage of all the latest and new features.

If you are having any requirement for .Net development, Then CodeStore Technologies is the right place for you. We have developers who have a great experience in handling Microsoft .Net and can fulfil your demand of development using .NET 5. Above all we have also successfully delivered number of projects in dot net.

To sum up, if you have any query share the same at- [email protected]