What is Defect/ Bug?

What is Defect Life Cycle? 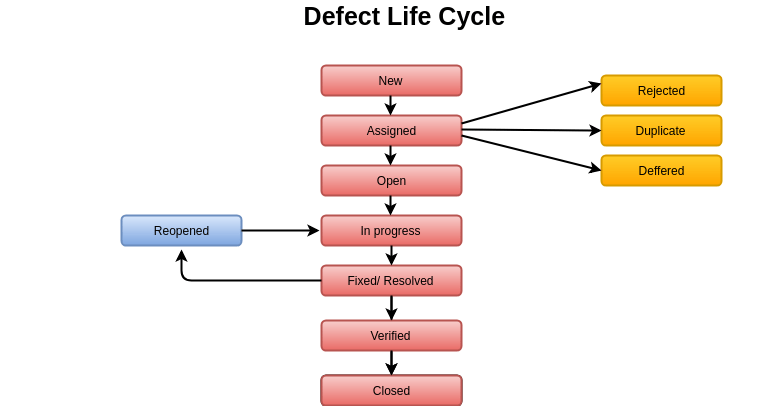 Description of various stages of a defect/bug

When the bug is posted for the first time, its state is “NEW”. This means that a bug is not yet approved.

After a tester has posted the bug, the lead of the tester approves that the bug is genuine, and he changes the state as “Open”.

Once the lead changes the state as “Open”, he assigns the bug to the corresponding developer or developer’s team. The stage of bug is now “Assigned”

Once the developer starts working on the bug, he changes the state of a bug as “in progress”.

After fixing the issue by developers, the status of the bug or defect is changed to “Resolved’ and reassigned to a tester for retesting.

The testing team again retests the fixed issue and its status is marked as retest until testing is complete.

If the bug still exists even after the bug is fixed by the developer, the tester changes the status as “Reopened”. The bug traverses the life cycle once again.

What is “Reject” status?

Why we get the “Reject” status?

• Because of requirement misunderstanding.

• Because of the improper installation of a product.

• Because of extra features.

What is “Duplicate” status?

If a tester logging a bug which is already logged by another test engineer, that is called a duplicate bug.

Why we get the “Duplicate” status?

• Because of common features.

• Another test engineer working on the same module logs a similar defect.

• Suppose, a bug logged by another tester, but the developer did not fix that due to some reason. Now new tester finds the same bug while testing and logs it as a separate defect.

• An old project has some bugs, now tester finds a bug and again he gets the duplicate bug.

• To avoid the duplicate bug first, you must search that bug in the defects list.

What is “Cannot be Fixed ” status?

Tester finds a bug and logs it, but the developer says bug cannot be fixed which means the developer is accepting that the bug exists and he is not in a state of fixing it.

Why we get the “Cannot be Fixed” status?

• If the bug is in the root of product (ex-if there is a minor bug in the root of a product or in core features, chances are there fixing that bug might introduce a lot of another bug).

• If relevant technology does not exist to fix the defect.

Developer accepts that it is a defect but he says that he wants to fix it later, because for some reason.

Why we get the “Postponed/Deferred” status?

• There might be a minor bug and the developer is not having sufficient time to fix it.

• The customer wants some changes in the project, developer predicts that the changes might be needed in the module in which bug found. So they will wait for the customer, after that according to need, he will fix the bug.

What is “Not Reproducible ” status?

Why we get the “Not Reproducible ” status?

• Because of improper defect report prepared.

• Because of the inconsistent defect.

What is “Request for Enhancement/REF”?

If there is some problem in software, but it is not part of requirement specification initially
provided, then it is called as an enhancement.

Ex- if we want to delete all emails once and there is no “select all” button then you must select all checkboxes. So, this is not a defect because it is not in the requirement, it is called as an enhancement. 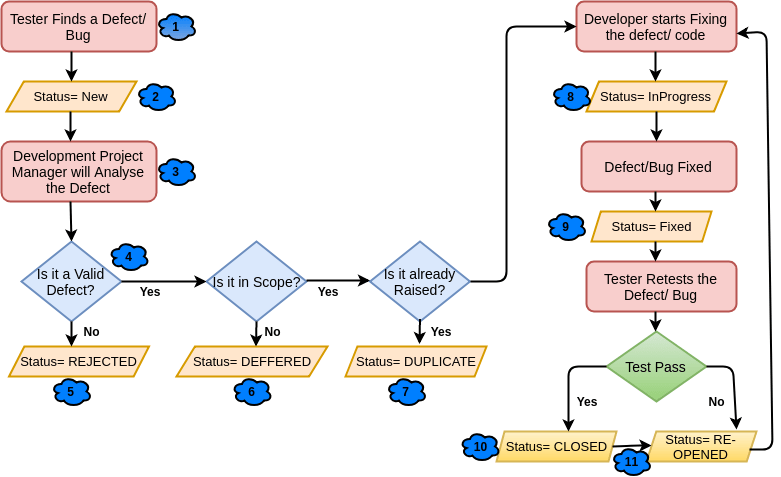