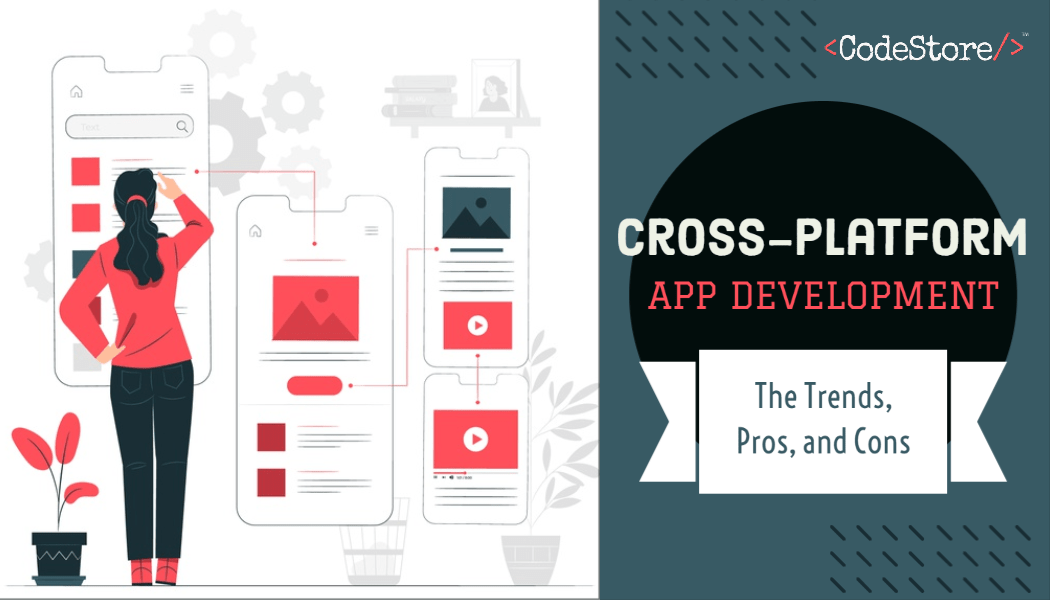 With a surging rise in smartphone usage, people want apps that run well and utilize the hardware to their advantage. What about combining their features to make them available on multiple platforms?

Over the last few years, cross-platform mobile app development has emerged as one of the most popular app development trends. It is not a surprise as adopting this hybrid approach facilitates the development of apps for multiple platforms using a single codebase that not only saves time for the engineer but also unnecessary efforts and money.

While the more traditional native apps are developed to function on a particular operating system, it has a major disadvantage. The native app approach makes it imperative to develop the same app twice as it is designated to operate on a specific platform only.

Cross-platform apps, on the other hand, can run on multiple platforms seamlessly and can be categorized into two segments.

The native cross-platform apps are developed by utilizing API that is supplied by the Apple or Android SDK but is then implemented in other programming languages that are not supported by the OS vendor. A third-party vendor is involved who facilitates an integrated environment that handles the procedure of development of the native app bundle for android and iOS through a distinct cross-platform codebase. The final result is a cross-platform app that utilizes native APIs and accomplishes the native performance without much of a lag. Xamarin, NativeScript, and React Native are popular examples of this cross-platform approach.

It is possible to embed HTML5 apps in a narrow native container with hybrid apps, that couples the best and worst elements of both. However, this approach is mostly not preferred because it has performance issues when an app’s User Interface is affluent in components. These are essentially WebViews that run in browsers, and thus struggle to accomplish a complete native feel and look.

The Pros of Cross-Platform App Development

The driving force behind the popularity of cross-platform app development is that it is a fast, cost-effective solution.

Single Reusable Code: The developer teams don’t have to write special codes for various platforms with this approach. Instead, the generic program for an app is frequently leveraged with all platforms. The same code base is utilized in bits for future projects as well.

Targeting many markets: A business can focus on multiple markets without having to spend time & resources to develop the same app differently for different platforms.

Cloud Integration: Cross-platform apps are versatile and can benefit from several plugins that can be integrated with cloud settings. The single source code can be coordinated with many plug-ins and extensions to boost the app’s functionality as well as scalability.

A Smaller Team: A small team of developers who knows how to use React Native or Flutter is enough to develop a multi-platform app. They will also finish the development faster as cross-reference checking of two different apps is not needed.

Uniform Design: The designers and developers can easily foresee the interactions of users with the app over several platforms when it comes to a cross-platform app. This allows them to craft a uniform user experience that will delight the users.

Without cross-platform solutions, efficient developers are required who have know-how on both iOS and Android. The time for development will witness a surgeon a massive degree and the costs can skyrocket with the deployment of two separate teams to do the job.

So far, the blog has spoken highly of the cross-platform app development but there are obviously some downsides to this approach, as well. Let’s have a look!

A Little Compromise: Despite the wide range of utilities of the cross-platform apps, they still necessitate a compromise. An application designed for a certain operating system on a given device would often be much better suited to the design of that particular platform in comparison to a one-to-all solution.

Slower Code Performance: During the developmental stage, cross-compliance often slows the code down and even lowers the limit. Also, developers sometimes have to make use of limited tools and that is best suited to a specific app.

Restricted User Experience: Cross-platform applications can not take the complete leverage of the native-exclusive features to offer excellent user experiences. The screen layouts, platforms are different and the functionalities vary. Thus the app needs to adjust and limit its scope.

React Native is holding its ground when it comes to cross-platform app development. The pseudo-native framework has been developed & maintained robustly by Facebook for long. Based on React JS it makes optimum utilization of JSX- a hybrid of HTML & JavaScript. It is open-source & takes less time to develop apps and thus its popularity is expected to remain intact.

Xamarin is one of the most popular hybrid mobile app development tools. With Xamarin, bugs can easily be avoided and so the app quality can be improved. It benefits the performance of the app because of its code-reusability feature. Businesses are opting for Xamarin and it is trending!

Flutter is a popular cross-platform framework for app development that is maintained by Google (who is also involved in developing Android Native Framework). It supports the use of similar user interfaces in both platforms and aims to make implementations for material design simpler. It utilizes Dart as its programming language and is adopted by many cross-platform apps.

React Native and Flutter are not the only solutions when you start working on your revolutionary product. NativeScript can be a great alternative framework that might prove the best for your business in 2020.

Developed by Microsoft as a free and open-source web framework, it allows web developers to craft apps using HTML and C#. It was released in late 2019 and since then, it has garnered a lot of attention riding high on the flexibility and simplicity it offers to the developers. It allows for both client-side and server-side development.

In the world of the 21st century, the app market is expanding rapidly. The arena of mobile marketing is becoming more competitive and to ensure the visibility of an app in such a tough setting, one needs to be very careful with the approach for mobile app development. Cross-platform is surely a direction worth considering if cutting costs, shortening development time, and reaching out to the wider audience is the priority.